When Greg Cole spoke at the Seventh annual Mid-South Agricultural and Environmental Law Conference last year, it was the first time he had given a virtual presentation because of the Covid-19 pandemic.

For Cole, president and CEO of Little Rock, Ark.-based AgHeritage Farm Credit Services, and other ag leaders it was a time of great uncertainty. They didn’t know what the next few months of the virus-induced economic shutdown might bring.

Fast forward to this year’s conference, which was again held virtually instead of at its usual location at the University of Memphis Law School Campus in downtown Memphis due to Covid-19 concerns, and Cole expressed relief at the way conditions have improved over the last 12 months.

“There’s an old term we hear over and over – what a difference a year makes,” he said. “That is an understatement. This was my first presentation that I did that was virtual last year, and, like many of you, we were working at home upstairs or downstairs and trying to figure out who turned the lights out on our lives both personally and professionally.

“It was a very stressful time with a lot of things going on. Obviously, for agriculture we had a lot of headwinds. I would characterize them as hurricane force headwinds at the time. Then over the last year the winds have shifted dramatically, and we have brisk tailwinds.”

Cole listed five factors agriculture has been dealing with that impacted farmers and ranchers from the beginning of the pandemic in February of 2020, through the end of 2020 and into the first few months of 2021.

“We went into 2020 with excess global supplies,” he noted. “We have been in that environment really for the last seven years, leading up to the beginning of 2020 from the big downturn after the last supercycle concluded in 2013.

“So we already had those headwinds with excess global supplies there; we had the trade war issues, especially with China, that were irritating the whole situation and further depressing prices and exports. Then, all of a sudden, we have this Covid situation which was historical to say the least. It came in and disrupted not just our lives, but the general economy.”

Agriculture was spared little of the drama. “I would be upstairs working 24/7, reading economic data and talking to peers throughout the United States because we all had billions of dollars of assets to manage.

“We’re thinking, gosh, what's going on here? We’ve never seen a time when all of a sudden we were euthanizing hogs and chickens because processing facilities had failed due to the Covid situation. Or what happened in the beef industry when the price of a steak went up, but the price to the cattle producer went down. We had to pour milk in the street because of changes in the food service industry.”

Motorists stopped driving so ethanol usage declined, which affected the corn market. “So everything that could go wrong went wrong. That had already increased the hurricane winds in 2020. Then we were fortunate that the government started to intervene, which is not a new thing for us in agriculture. They’ve always been a big part of our piece.”

In 2020, the U.S. government’s help extended beyond agriculture with Congress passing stimulus programs along with new assistance measures such as the Paycheck Protection Program and the Coronavirus Food Assistance Program or CFAP.

“In times like these, you wonder if the government will run out of money to intervene,” he said. “Even though they quickly dove in to help us and did a lot of good things to stabilize ourselves, remember from Economics 101 that there’s no free lunch. So we took our deficit and quadrupled it in 2020. We took debt to GDP to the highest level since the end of World War II.

“The point is when we have a bad year in ag the more we reduce the short-term pain by refinancing the more the longer term pain. So we still have the fiscal issue of dealing with all this money we have to pay back.” 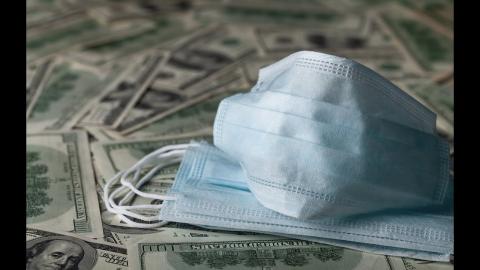