Just when it looked like things couldn’t get much worse in agriculture due to the impact of Covid-19 in the United States and the rest of the world, the outlook began to take a turn for the better.

“When we got into the tail end of 2020, guess what? The game changed,” said Greg Cole, president and CEO of AgHeritage Farm Credit Services. “It’s like what happened to the Razorbacks in the Nebraska game. In the eighth inning, it changed very rapidly.”

Cole, who spoke at the virtual 2021 National Agricultural and Environmental Law Conference, said global supplies of agricultural commodities suddenly began tightening as the trade war with China started winding down and it resumed buying U.S. corn and soybeans and, to a lesser extent, U.S. cotton.

“You had the emerging growth of the swine industry in China,” he said. “It had been hit with African swine fever a few years ago so as they increased hog production there was more demand for corn and soybeans. So a lot of exports went to China, which is what drove the last supercycle. You had some weather issues in Argentina and Brazil so that, all of a sudden, supplies got very tight.”

Corn and soybean prices “really skyrocketed during that time,” he noted. “The Covid situation began to stabilize. The processing plants began running again, and things began to normalize. You had the government intervention with the Coronavirus Food Assistance Program. So we finished 2020 very strong, and then you know where we sit today (June 10).”

Cole presented a slide that depicted changes in U.S. net farm income over the last 100 years. The figures have been adjusted for inflation so that users can compare “apples to apples.”

“These peaks here show a point in time and the black, horizontal lines are the averages for a decade,” he said. “The peaks represent the commodity price supercycles of which there have been three or four over the last 100 years.

“We came off of one that ran from 2007 to the end of 2013, That supercycle emerged obviously from the demand for our soybeans from China; the emergence of the U.S. ethanol industry – we were burning corn for fuel. We had some great years. I know in 2012 our farmers made more money that in any single year in my career of loaning money in the Mississippi Delta.”

That was followed by a sharp decline of over 55 percent in net farm income. “That was the worst decline since the 1930s and for the last seven years we have been down and flat with that,” he noted.

“In 2020, we finished with the highest level of net farm income since 2013 with about $123-plus billion. I have a slide in a minute that shows that about 40 percent of that was government subsidies, the highest level in history. But, obviously, corn and soybeans are much higher, as high as they were in 2007 through 2009.” 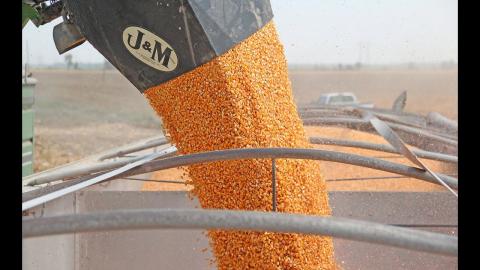