Veteran agricultural lender Greg Cole says three cycles define the situations most farmers find themselves in year in and year out: “You’re either in a problem, coming out of a problem or going into a problem.”

For now, fortunately, farmers seem to be coming out of a problem as the prices of most row crop commodities grown in the Mid-South have risen to their highest levels since 2012-13. But that doesn’t mean those higher prices will continue indefinitely.

Cole, president and CEO of the Little Rock, Ark.-based AgHeritage Farm Credit Services, told participants in the Eight Annual Mid-South Agricultural and Environmental Law Conference one of the reasons producers were able to survive seven years of low prices is the safety net Congress put into the 2014 and 2018 farm bills.

“When you look at it, Covid-19, the trade wars and excess global supplies of crop commodities are, for the most part, in our rear-view mirrors, thank goodness” he said. “The farm safety net has worked very well here in the Mid-South. That is a shout-out I want to give to Congress and the legislative leaders there.

“They did a great job, and, as they start writing the 2023 farm bill, our encouragement from the lenders is stay the course – what you did worked. We know that as we come out of a problem, we’ll go back into another problem, and we will need a safety net.”

Cole said the current market fundamentals suggest a bullish outlook on net farm income for the near term, and a number of positives for agricultural, including strong farmer profitability, appreciating equipment and land values and low interest rates.

“So you have a perfect, perfect scenario that we have not seen in some time,” he noted. “But what I want to remind people is how quickly things can change.”

In a meeting Cole recently held with members of the management team at AgHeritage Farm Credit Services, which makes loans mostly to row crop producers in eastern Arkansas, Cole said he asked them to go back in time:

“Think about when we were sitting here in the fall of 2019. We never could have predicted what happened in 2020. And when we were at this conference last year everything was so doom and gloom that never in my wildest dreams did I think I would be sitting here this year and use the words bullish, profitability and lots of money.”

Cole said people often ask what he has learned in his 37-year career with Farm Credit about which producers and lenders will make it in these up-and-down cycles that can have such a devastating impact on agriculture?

“The answer is pretty simple – it’s all about risk,” he said. “A farmer makes money by taking a risk, as does a lender. They key is to identify that risk, to quantify the risk and to manage the risk. The other major factor is the ones that have process improvement.

“Whether you’re a lender or farmer you have to learn to get better – either through using new technologies, using or developing a new skill set or leadership. Those are the ones that have the mindset of what I call continuous learning, innovating and being able to manage risks are the ones who will be players in the future.”

Farmers and lenders must also begin to watch topics that have not traditionally been a concern – factors such as climate change, resilient agriculture, carbon credits and security risks to see how they can fit into production agriculture.

“I’m, obviously by trade, a risk manager so I'm always looking at where can I get hit that hurts me the worst?” he said. “And when I look at the last supercycle it was China that really drove up the demand for corn and soybeans which affected our land values.

“Then we had issues with China and prices went way down. Now China has bounced back and become a major purchaser of our commodities. I try to keep up with what's happening over there with the buildup of their military and the potential for a naval conflict. I'm concerned if we have a conflict there that could be our next major inflection point for risk in agriculture.” 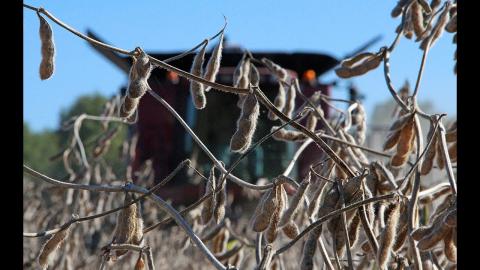